Seriously? Week 12, already? Time has flown! I’ve been asked several times over the last wee while what I like and dislike most about living in Mexico. The obvious answers are that I like the weather the most and dislike being away from my family but that wouldn’t make much of a blog. So here are some of the little things I’ve been noticing.

That’s how I get in and out of my home. Same for most of the other people I know. I have a key for the big main gates and then one for the padlock to my front door. I panicked about the first drunk time I’d have to unpadlock my door in the dark. I worried the first night I slept here about a middle of the night fire and not being able to find my keys (then I remembered my bedroom contains one wall of glass patio doors, which are easy to open.) It was terribly weird at first but I guess now I’m used to it.

There are a lot of dogs roaming the streets. Thankfully they all seem really docile (exhausted by the heat perhaps) and I’ve never had problems with them. Those of you who know me well will know, I’m not the best with dogs, I have a sizeable chunk of fear in me for them, but I am coping. When I first arrived I was regretting not spending the 100 quid on the rabies jag that the doctor mentioned but so far I’ve not had to run squealing down the road away from them.

Most of the taxis here are held together by gaffa tape and prayers. None of them have seatbelts in the back. I nearly had a conniption the first time I got in one. Also the way people drive is crazy. They seem to have little regard for lanes, or the rules of the road. They overtake willy-nilly and it’s a wonder anyone gets anywhere at all. I reckon the only thing keeping me alive is the fact that I live a charmed life….that and the collective good vibes from everyone who loves me. The roads in the area that we live in look like this:

so it is quite the bumpy ride. Be careful what you eat before you get in a cab, you could be seeing it again. (I walk a lot)

All the time. In the run up to the Feast of Guadalupe they were constant. And I mean at all hours of the day and night. I never understood why they had fireworks during the day so I asked some staff members to explain it. They said they were just noisemakers to ‘wake up the virgin’. Now in my mind, at that time of day the virgin would be long awake, it’s the other ones who were out all night up to mischief that you’d need to worry about.

Chilli goes on EVERYTHING. Yes, I mean everything. Some things I understand, like chicken or tacos, others took a little getting used to like having it on oranges or apples. There is a vegetable here called jicama, which is Mexican yam and people generally have it raw, chopped up in salads, leggered in chilli.

In many bars, restaurants and public places when you use the restroom/washroom/bathroom (whatever term you like to use) you will find a little bin beside the toilet for you to place your used toilet paper. The plumbing here is so atrocious that it is the custom not to flush paper. In some places this could lead to it looking like a scene from The Exorcist but thankfully I’ve not encountered anything too horrific yet.

My new neighbours are a massive cow, some turkeys and rooster that canny tell the time and cockadoodles at all hours of the day and night. When I run out of money I shall eat them. I need say no more.

I think these are brilliant. I think it’s amazing how you can fit a whole array of products in a space no bigger than a doorway. Utterly fantastic. I think doorways have traditionally been underused as mere exits and entrances, and all places should have doorway shops. In fact when I give up this teaching melarky I am going to open a doorway shop filled with shoes….no, wait, I’m not sure I could sell shoes it would be like setting a meth addict on the production line….I’ll sell something less tempting like anoraks.

It is very dusty here. Think something like the O.K Corral, with less tumbleweed and more dust and you have the idea. When the wind gets up and a dust storm starts brewing it can be pretty hardcore. All my shoes are covered in a fine layer of dust (the pretties have hardly been out at all) and if I leave the door to my house open (on the wrong day) my beautiful white palace which usually looks like this:

gets kinda murky and ends up looking like this: 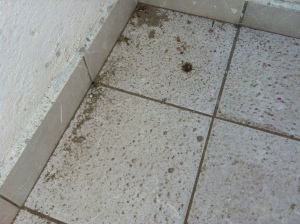 The people here spend a lot of time sweeping the dust in front of their homes, day in and day out. I think there is probably something quite profound in this, about persistence or dedication, if only I could identify it.

In addition to the market stalls which sell crafts, fruits and vegetables there are sellers who drive around in vehicles with loudspeakers selling things like gas or water. This is accompanied by the cheesiest of music. It’s quite the spectacle but not so much at silly o’clock.

Mexico has quite the variety of insects. They are unusual shapes and colours and I’m pretty sure some of them can kill me. In my previous life as a Derry girl I’d always been the type of girl to holler for my dad or the nearest bloke to sort out the creepy crawlies. I have never been fond of them….and how sneaky they are. I think I’d feel much more comfortable with them if they announced themselves, you know, gave some sort of indication they were there, like a large vehicle reversing.

Here in Mexico I have to deal with them myself. There is a can of Raid in every room and I have no problem emptying the whole can if needs be! I’ve seen a cricket the size of your fist in the school toilets, a spider so big that he looked like he’d crawl up into bed beside me and demand breakfast. And one morning there was the double whammy: a scorpion on the wall and a spider on the floor right beside my bed. Both were huge and neither had been there when I went to sleep and so I wigged out at the fact that probably they had crawled over me in the middle of the night. This called for two cans of raid – one in each hand, like some sort of badass warrior. Badass I may have been in that moment but I still couldn’t bring myself to lift them off the floor, cos that would involve getting too damn close to them. (My neighbour came in with a dustpan and brush and sorted it out)