I guess, being a teacher, that it’s a good job I like kids. I’m constantly surprised by their energy, creativity and general wilfulness. I like the sheer joy in the silliest of things. In fact a lot of the adults I know could benefit from acting more like kids sometimes. Only sometimes mind you, the bills still need paid.

I’ve never really been motivated to have kids myself. I dunno why that is. Maybe it’s because I’m surrounded by them all day long, maybe I’m just too selfish and don’t want to give up my easy going, floating lifestyle, maybe I don’t like the idea of being responsible for another human being for ever.

I know lots of people who have desperately wanted children and have been trying for years. I know people who are amazing parents and who work constantly to create a fantastic life for their kids. I totally admire people in both those situations. It is a hard road and I respect anybody who makes that choice. I’m not sure it’s for me though.

There have been many articles on the issue of woman without children and everyone seems to have an opinion on it. Some view childless woman as selfish hags, or think of them as barren wastelands, to be shunned or pitied. Very few are jealous of them and want to celebrate their lifestyles.

One of my very good friends, who I went to college with, has always encouraged my life of ‘reckless abandonment’. She’s got two beautiful kids and obviously wouldn’t change them for the world but is very jealous of my ability to pick up and go to wherever I want, whenever I want. I remember one very funny conversation where she talked at length about her new washing machine and then laughed herself silly when she asked me about my stint performing in Australia.  ‘As if my new washer could compare to that?’ I tried to think of a time when I would be delighted to have a new washing machine but haven’t quite managed it yet. Although I do see the joy that one brings to others.

I think a huge part of the reason that I’m childless is that the world is such a messed up place. It is a really frightening thought to bring a child into this world, with all its guns, drugs and corruption. Never mind the constant pressure from the Internet and advertisements – there are just so many ways for someone you love to get hurt.

And then there’s the strain of having to answer huge life questions. How to explain the mysteries of the universe and the cruelty of humanity all while trying not to burn the dinner? Nightmare scenario. 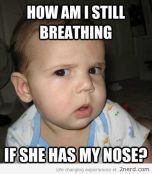 I think I’d worry myself into the loony bin. (I think I’ve started worrying a little bit while writing this!) I don’t know how parents cope with that continual tightness in their chest and the constant fear that something awful might happen to their precious one. (That sounded a little Lord of the Rings, didn’t it?)

Let me know your thoughts on kids, childlessness and the parenting game.

Prompt: Say all the things you never would in real life

(no surprise I deviated from this a little)

It would be easy to tell you

that you’re my favourite and

I love everything about you.

free from my lips

It looks pretty at first

glistening and twinkling in the sunlight,

a butterfly perches on your ear,

and we laugh about the living art work you’ve become.

the insects find their way home,

sneaking up on you

licking and sticking to your legs.

An army of ants

try to carry you home

to their nest, a prize.

Beetles crawl up your arm

and you are swarmed by bees,

you cannot open your mouth now

and the flies are blocking your nose,

only the whites of your eyes showing.

I’m sorry I said anything

I try to pick the words off your skin

but I cannot find them

hidden beneath your costume

I turn, close the door behind me

and wait for the exterminator.