Myself and three other teachers from school had gone away to celebrate the long weekend for Mexican Independence Day. We checked the weather forecast and knew there would be some thunder storms but there was no mention of Tropical Storm Manuel.

We left on the overnight bus on Friday and when we arrived in Ixtapa on Saturday morning there were clear skies with just a few clouds. We were hopeful that the forecast was overly pessimistic and the worst would pass us by.

As the day progressed the rain started and the howling wind battered the hotel. The entire lobby of the hotel is open to the elements and so there was no protection. The staff were constantly sweeping out water and doing their best to keep the place running. It was so bizarre to see people still swimming in the pool or playing water polo, enjoying a drink in the pool bar while the rain lashed down. We went for a walk along the beach and saw so many families building sand castles and having a dip in the sea in the breaks during the storm.

It was most scary at night. On both Saturday and Sunday night there was constant rain and wind. The cell and Internet service was down and the power was out for a period of time. In the restaurant of the hotel the water poured in through the roof and it collapsed.

On Monday we checked out and hoped to catch our bus back to Tequiquiapan. At the office we were told the roads were closed and to return a few hours later. That evening we were told that no busses would leave as the roads in both directions were closed. The Internet and cell service were still down so we couldn’t even message anyone for help or to let our families back at home know we were ok. We decided to relocate from Ixtapa to Zihautenjo to be closer to the main bus station and airport. We knew also that it would be easier to find cheaper accommodation there. No ATMs were working so we were trying to be careful with our cash.

In Zihautenjo we were lucky to find a cheap hotel with a superstar of a landlady. She gave us a discounted price and also let us use the phone to contact work and phone our families in the UK. She also helped by translating anything we didn’t understand and spoke to the bus company several times to try and get a straight answer.

As crazy as it has been it’s been impossible to be anything but positive. When watching the news we saw that over 80 people have been killed, hundreds more have had their entire lives swept away. The toll keeps rising.

One news report showed a little boy of about seven years old, wearing only a pair of shorts talking about how his home and things were destroyed. Another showed a man knee deep in water trying to sweep it out of his home, while his wife showed the news reporter around. Their child’s cot was covered in mud.

We’ve heard stories from friends who holidayed in Acapulco and had to be airlifted back to Mexico City. Other friends who were camping and had to abandon their cars as the river swelled and washed away their tents. Another teacher from our school drove back home across the alternative route. It took 22 hours to make a five-hour journey, across a partially damaged road with debris falling all around. They are lucky to be back alive.

When we walked along the coastline in Zihautenjo we saw seafront restaurants destroyed and the once pretty beach is covered with litter. The devastation is everywhere.

We were so lucky. We were as safe and dry as we could possibly be. And then by a stroke of luck we were lucky enough to get home in one piece. The State of Queretaro organized free flights for residents of their state. We had a few hours of queuing up at the airport and having to make sure our awful Spanglish was understood so we could be on the rescue list. But we got home and I have been counting my blessings ever since.

Others are not so lucky and the Mexican Red Cross are doing their best to help them. They’ve put together a really good relief effort but obviously they can always use extra help. If anyone can donate money that would be amazing and if would be put to good use. www.cruzrojamexicana.org.uk

Tropical Storm Manuel has now been upgraded to a Hurricane. This is working it’s way up one side of the country while Hurricane Ingrid attacks the other. The death toll is only going to get higher. Who knows when this trauma will end? Please keep the people of Mexico in your hearts. They need as much help as humanly possible. 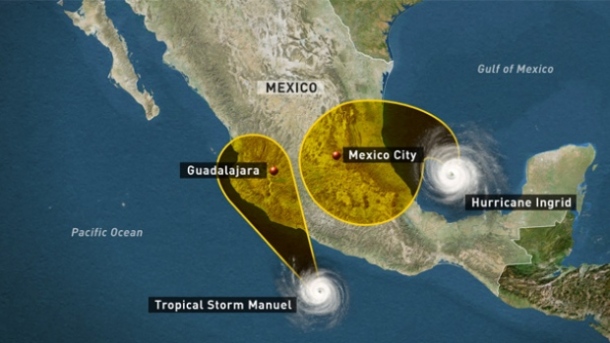 2 thoughts on “Tropical Storm Manuel – My Side of the Story”